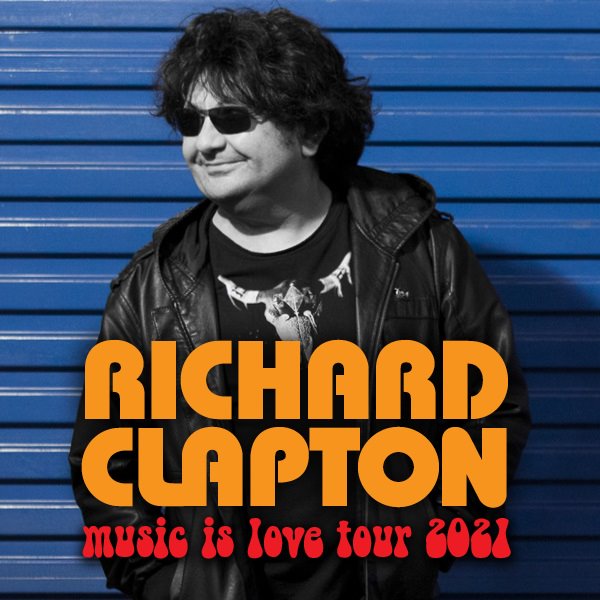 Frontier Touring by arrangement with Premier Artists is pleased to announce that iconic singer, songwriter and ARIA Hall Of Fame inductee Richard Clapton will head across the country in June 2021 on his Music Is Love national tour, performing six headline theatre shows in Melbourne, Brisbane, Thirroul, Sydney, Adelaide and Perth.

‘Clapton’s band is on fire’ – The Australian

‘It’s all about passion and precision here, as Clapton swings from The Doors to Neil Young, offering a rock history lesson, including a peek inside his musical youth’ ★★★★ – Herald Sun

‘Clapton has crafted an album that honours its title… The message is timeless, and Clapton, with his enduring hippie look and soulful voice, is the perfect messenger’ – STACK

Fresh off the release of Clapton’s new album Music Is Love (1966-1970) (released on Mushroom’s Bloodlines label) – which debuted at #3 on the ARIA Album Chart in April 2021, his highest-ever chart position – the revered songwriter will perform two sets at shows. Ticketholders will be treated to an electric first half showcasing his latest release, followed by a ‘Best Of’ set featuring all of Clapton’s most legendary hits.

“I am so looking forward to this tour,” says Richard. “This is a very rare event so come on down and hear some of the world’s greatest songs played by a great band. And yeah – I will be playing a lot of my old songs as well, so all in all it’s gonna be a lot of fun! This is gonna be a real trip!”

Music Is Love is Clapton’s first covers album and his 16th studio release, inspired by his visit to San Francisco’s Haight-Ashbury two years ago. On this release, Clapton has gone back to his roots, highlighting his love for artists such as Bob Dylan, The Byrds, David Crosby, Neil Young and Buffalo Springfield.

With the likes of Bob Dylan, Neil Young and Jackson Browne as fans, Richard Clapton (Ralph to his mates) has spent his life on the road. In the ‘70s, Paul McCartney loved ‘Girls On The Avenue’ so much he took a copy back to England. During a six-week tour with Neil Young in the ‘80s, Neil put his arm around Clapton after coming offstage one night to declare, “You’re a bad boy, Ralph. My band hasn’t been to bed for two days. I’m gonna change the name of my tour from Rust Never Sleeps to Ralph Never Sleeps!”

Inducted into the ARIA Hall Of Fame in 1999, Clapton is considered one of our finest songwriters, responsible for iconic songs such as ‘Girls On The Avenue’, ‘Deep Water’, ‘Capricorn Dancer’, ‘I Am An Island’, ‘The Best Years Of Our Lives’, ‘Lucky Country’, and ‘Glory Road’. Nicknamed ‘Australia’s favourite hippie’, he nurtured the career of INXS (producing their first hit ‘The Loved One’ and second album Underneath The Covers), and released his autobiography The Best Years Of Our Lives in 2014.

THEATRE MODE:
Fully Reserved Seating
Licensed All Ages – Patrons under 18 can only attend with parent/guardian (over 18) with a valid ticket. Infants not admitted.